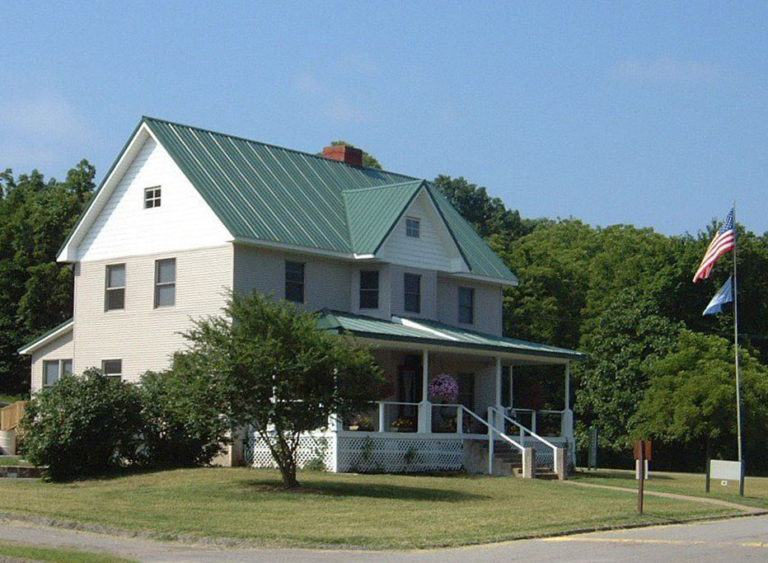 Any discussion of Flint Ridge has to include the years when a great majority of the Flint Ridge property was used as a logging and sawmill operation. We interviewed Mr. Pete Erickson for just that reason. Mr. Erickson’s father, Mr. Charles Erickson, operated an establishment that included over 2,500 acres of Flint Ridge property and was one of the largest employers in the area for 18 years. He was also the builder of the White House, an amenity that is as graceful and charming today as it was when it was first constructed over 70 years ago.

The elder Mr. Erickson came to Oklahoma from Wyoming in 1910. He eventually purchased 16 sections of timberland in Adair, Delaware and Cherokee Counties. He dealt with the representatives of the Cherokee Nation for the rights to the property and was well known for his amicable relations with the tribe. He provided steady employment to many of the Cherokees and was very conscientious when it came to any dealings with these people. His main hopes when he arrived here were to provide a new home for his family and to establish a sawmill for the purpose of fabricating repair parts for farm machinery.

In 1911, he purchased what was then one of the most modern sawmills available. Once the initial installation was complete, he began construction on the White House and several other buildings. The sawmill was located near the present-day tennis courts, and his office was located above where the present Sales Office is situated. In fact, the front portion of the Sales Office is the original structure. There was also a large barn located near the lower parking lot, and there was a boarding house located up the hollow toward the golf course.

The White House incorporated many unique details in its construction. The shingles were coated with fire retardant, and the siding was made of cedar. The walls had 2x6’s instead of 2x4’s, and the polished oak flooring was one of the big attractions of the house. It also had twin fireplaces and by 1915, had running water and electricity. And the newel post on the stairway was made from five kinds of inlaid wood. The house was a center of activity, and people came from miles around to see it.

The Sawmill was steam-powered with an auxillary generator and batteries to provide electricity. The water came from the small spring which flows from the side of the bluff overlooking the Recreation Area. They had a 3,000 gallon storage tank located halfway up the bluff and ran pipes to the steam engine and into the attic of the White House. The machinery of the sawmill also included stationary drills, planers, mills and other specialized equipment used to make the wooden farm machine parts. They eventually installed drying kilns and sold the completed parts finished down to the paint and lacquer. It was a well-planned operation which supplied enough repair parts to service a wide region of farms and ranches. Today you can see much of this equipment in the Main Recreation Area.

An interesting aspect related by Mr. Erickson is how he and his father would spend each Sunday afternoon marking the trees to be cut the following week. Taught by his Swedish father before him, Charles was a conservationist from Day One. No trees were to be cut unless he had marked them, and they were to fall in the direction he specified. The purpose behind this was to preserve many of the species of trees that were not in great abundance. For this reason, the area around Flint Ridge now has a greater number and a wider variety of certain trees than you will find anywhere else in the Oklahoma forests. In addition to the Oak and Pine most often used in the sawmill operation, you will find trees including Hickory, Cedar, Sycamore, Cottonwood, Dogwood, Walnut and Gum located on the Flint Ridge property.

The era of the Erickson Sawmill was exciting and romantic. The hustle and bustle of activity combined with the natural beauty of the area made for many memorable times. Mr. Erickson was a well-known, well-respected man, and his concern for the people and the forest around him can be appreciated by all of us. The beauty of Flint Ridge today can be traced to his concern and labor so many years ago.

Subscribe to receive news and alerts via email and SMS.

No active alerts at this time.